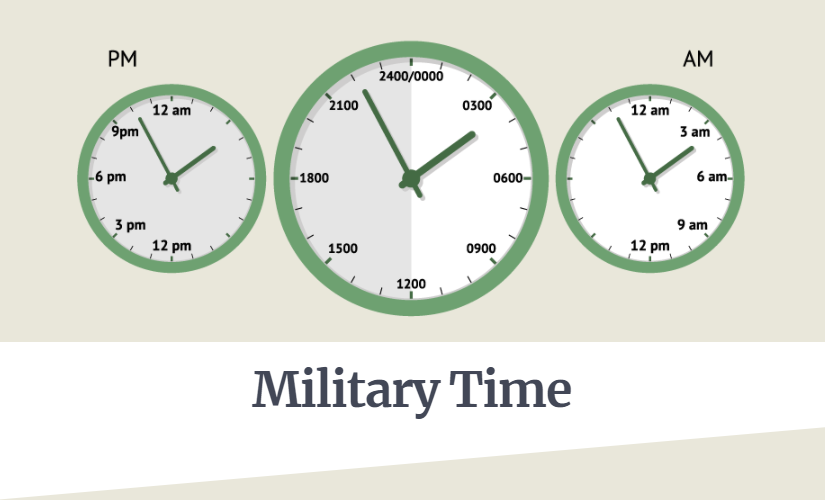 Military time was invented in 2100 BC by the Egyptians, this means that it is over 4000 years old. It was especially used in World War 1World War 2 as armies needed to communicate time without any mistakes. The reason the military used this method of communicating time was to eliminate confusion, not needing to use AM or PMto get rid of time conversions.

To this day this age-old method of telling time is still being used. Military time is also used by nurses, doctors, pilots, astronauts, scientists, firefighterscops. Below we explain what military time iswhy it is important for you to knowuse military time.

What is Military Time?

Why use Military Time?

There are many reasons why we should use military time. Using military time helps avoid confusion. Many important government agencies use military time like policeemergency services. Telling the right time is especially important when in a crisisone is under pressure to give the time, having to explain if you mean AM or PM would just take more timeeffort. It also helps when scheduling meetings as there will be no confusion as to whether the party means 7 in the morning or 7 in the eveningAM or PM will not be needed to distinguish.

Military time is also great when learning the time. Kids might find it easier to understanduse as each hour of the day has its own number. Standard time also repeats time when military time does not repeat the numbers of time. Using military time when setting alarms also eliminates confusion between AMPM.

Many businessesvital information like flight  timesboarding passes uses military time. Knowing military time will help in reading boarding passeshave no confusion of when the flight is actually being scheduled. Military watches are also much easier to read than standard time watches.

How to ReadSpeak Military Time

It is quite easy to read military time. From 1 AM in the morning until 12 PM the numbers are the same as civilian time. One would write 1 AM as 0100. After 12 PM the numbers just follow so 1 PM civilian or standard time would be 1300, one would pronounce it as ‘thirteen hundred hours’. The time then goes to 12 AM which is 2400 in military time, spoken as ‘twenty-four hundred hours’.

The reason civilians would rather use standard time is because it might be easier to write out. Numbers from 1 to 12 have lesser syllables than numbers from 12 to 24. Civilian time might seem easier now, however knowinglearning military time would save people a lot of confusion. Switching one’s phone to military time would eliminate the possibility of setting the wrong alarm time. It also helps with simple things like reading a boarding passscheduling meetings correctly. Practice will make perfectthe use of a converter will not be neccessary.